Second Chapter – The Dark Past

An overcast, windy guard waited for the two soldiers on Legford's walls. The smell of wet earth and rain was calming to the two sentries, who will be in duty for long hours. It was a calm rain, not the kind of roaring gale that makes you feel like the castle might fly over your head. Here it was quiet, the land was silent. Occasionally, a raven cawed as it flew between the towers of the castle.

It was in this somewhat languid weather that Sir Bernar and Ricon stood in the bastion. They were usually on duty at the same time, and passing the time by talking. Unless, an enemy army is about to enter the fortress with arrows and other dangerous devices. Bernar has such an important and beloved habit of talking on the ramparts while on guard duty, that it is the reason why he hates the Black Falcons so much.

As it happened many years ago, when the Falconers had already tried to take Legford. Bernar, as a young knight was telling a story of an adventure when the attack began. He was brazenly interrupted, and his friend did not survive the battle, so he can never tell him the end of the story. Terrible! His greatest dream is to cut off the leader of the Falcons as he's speaking. 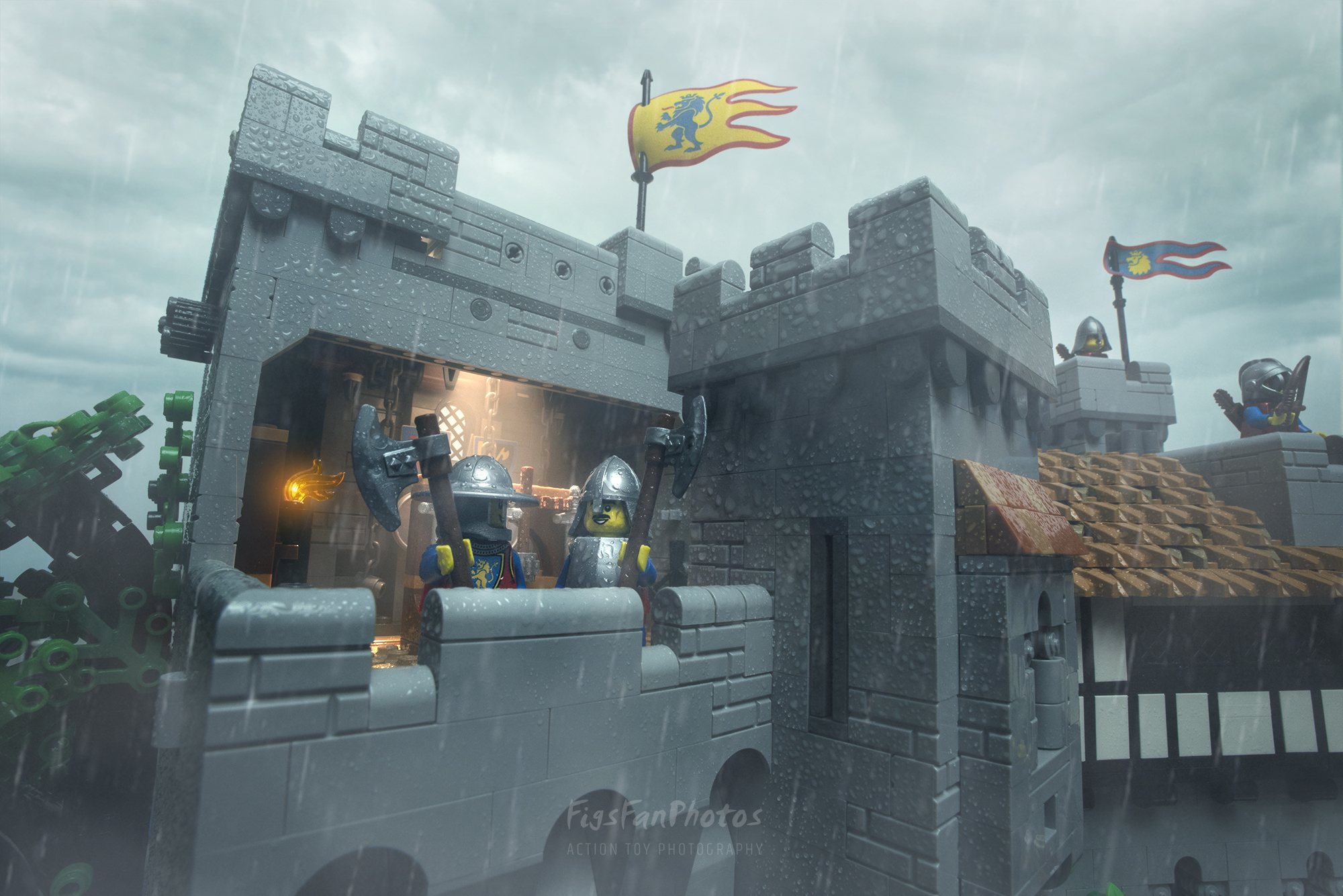 Fortunately, today doesn't hold too many surprises. But Ricon was bothered by something, so after hearing Bernar's story of how he seduced a riverside girl dressed as a courtier, he asked his older partner:
- It was a great story, Sir Bernar, but can I ask you a question?
- Of course son, but if you're wondering why I was wearing a courtesan's dress, well that's an interesting story. Just... - the knight was about to take a deep breath to start the next amazing story, but Ricon cut in.
- No, erm... Not about that, but more about the castle and therefore us.
- Well... OK, whoever, but don't interrupt me again, or I'll have you taken away with the Guardians! 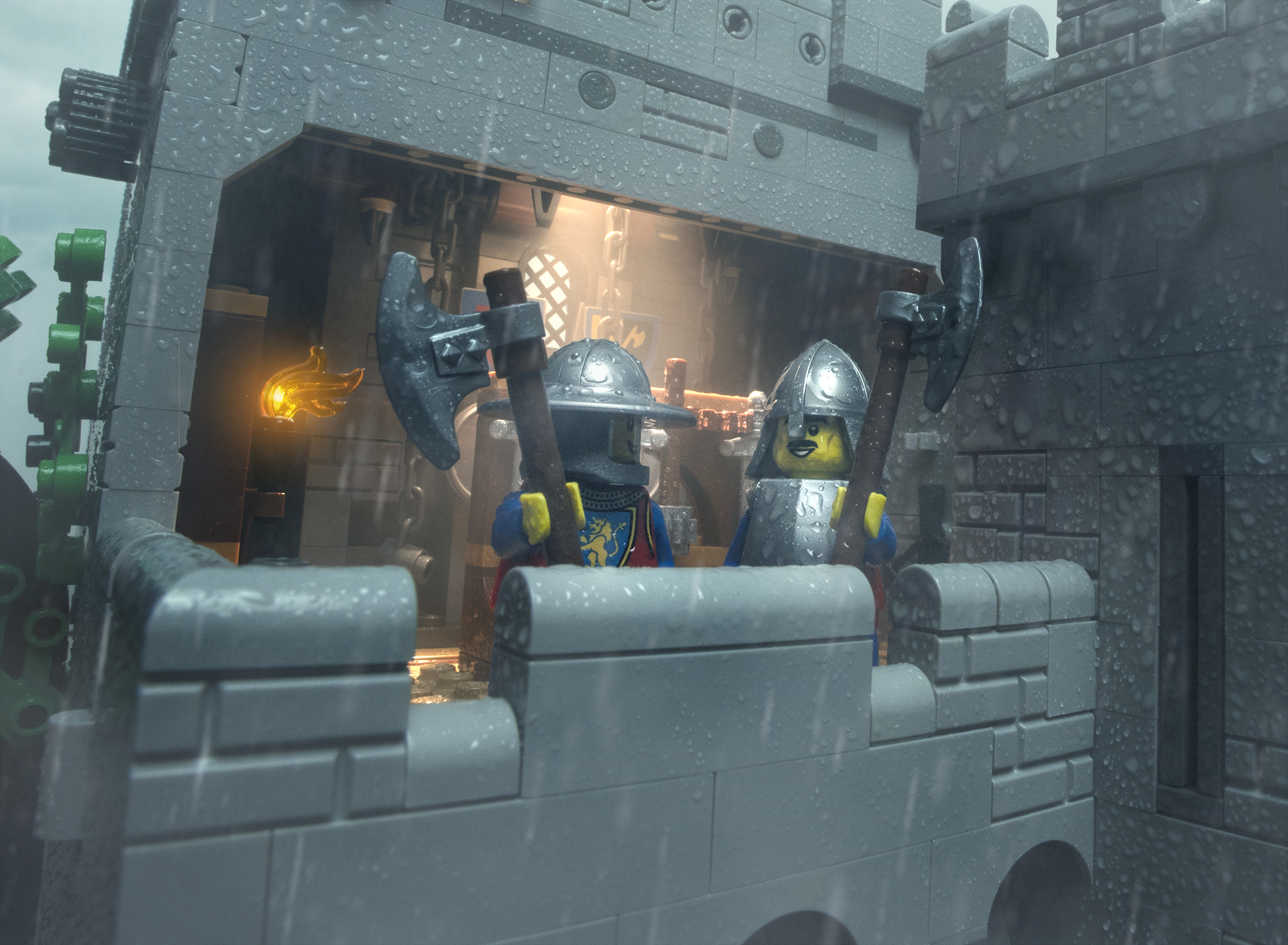 - So, I understand we have a larger garrison in the north, so that armies can't just march through our territory. What about the east side and the Brickenwood forest? Wouldn't we need reinforcements there?
- Hmm. I don't see the point. Even with 10 men it's hard to cross the wilderness, impossible with an army. The Warden’s' Road is the only trail walked, but even that is so tangled and narrow that it can only fit for a few men and a wagon or carriage. It is therefore dangerous because you cannot carry enough escorts, so the Forestmen can rob anyone. So we're protected from here, and our patrols will spot anyone who comes out of the forest.
- And the east? The wilderness is over there.
- The only way they could come from the east is from the Riverlands, but again, it's hard to move an army. Many places are swampy and boggy and there are few major bridges. If someone tried to come up from there, we would know before they got there, and then we'd be hitting them while they were wallowing in the mud. Don't worry, Legford is strategically well located.
- That's reassuring to hear.
Sir Bernar sees the situation perfectly, Legford can only be approached by an army from the north. What he doesn't know is that the Black Falcons are not approaching with an army this time and are not planning an open siege. Lord Godwin has learnt from the mistake of his father, who lost his troops against Legford because of the conditions of the Riverlands. After a long march, the weary falcon army suffered a crushing and bloody defeat.
*
Boromir is 152 years old and a very active wizard. Not just as confidant and advisor to the Queen, but he also occasionally takes long walks in the nearby forest and spends his energies teaching the young prince. Not to mention that, when it comes to carousing, he still drinks the most fashionable knights of the castle under the table. On such occasions, he waits until the last tavern guest has fallen off his feet, and then, with a broad smile under his huge grey moustache, he sneaks up to the barkeeper and says:
- Now, somebody give me a proper drink!
Anyone, who could stand it once longer than the old wizard, would probably become an immortal legend sung by bards. But, for now, it seems easier to slay a fire-breathing dragon than to outdrink Boromir. 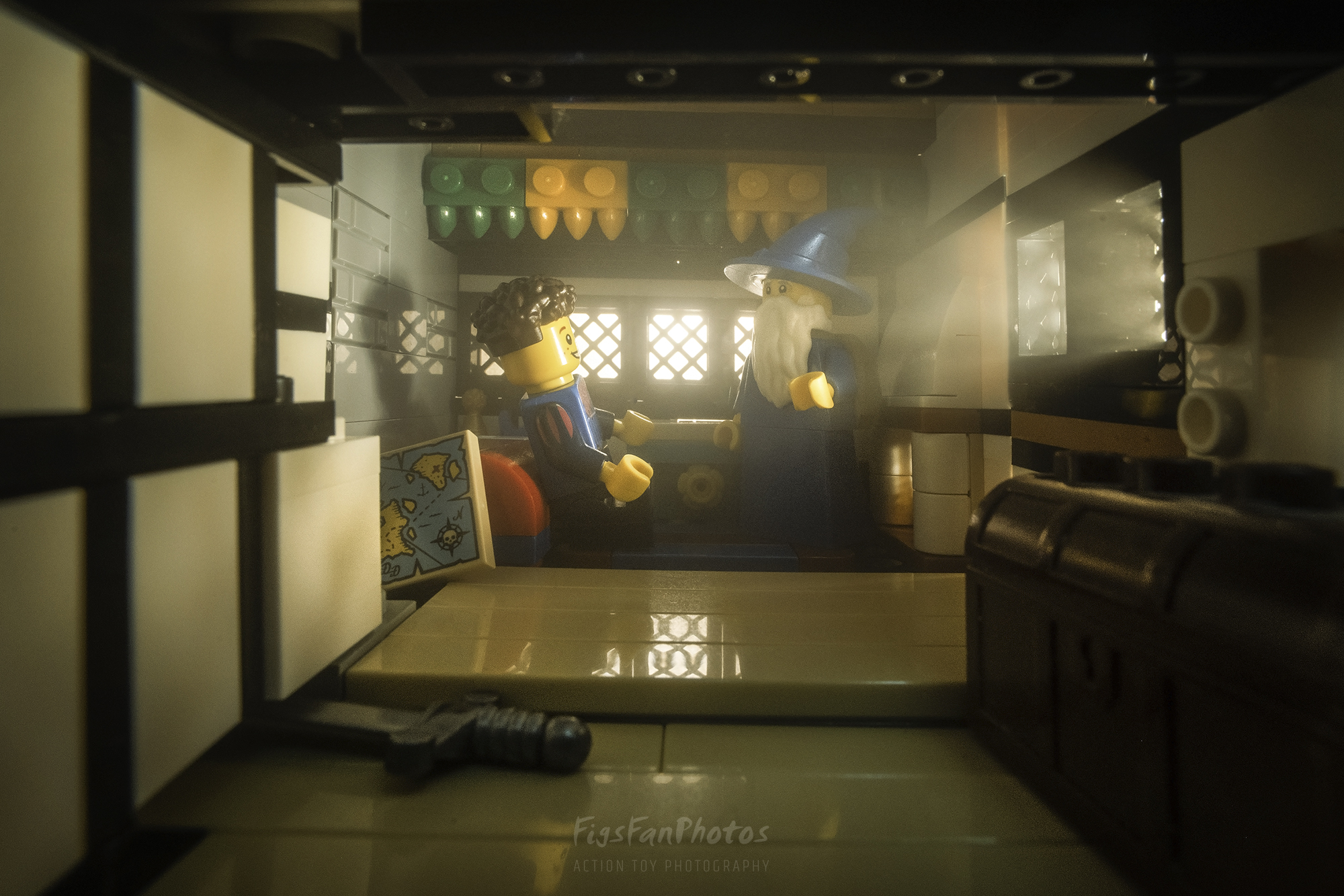 Today, the old wizard is far from the heady fumes of the taverns, as he is busy with the 13-year-old Prince Leo. He is named after his father, one of the greatest rulers of the House of Lions. The heir to the throne, Prince Leo II, is now ruled by his mother Lady Madelin until the young prince will be old enough to take his place on the throne.
Boromir planned to teach Leo mathematics and astronomy. He lit his long wooden pipe to talk to the young king about the curiosities of the world, pondering the billowing smoke. Leo, however, did not wait for the wizard to begin his speech, but suddenly the question burst out of him:
- Boromir! How did my father die?
Boromir was so startled by this out-of-nowhere question that he almost swallowed his pipe whole. Finally, he hiccupped from the badly inhaled smoke and snorted for a few minutes, which Leo waited patiently for, and then asked again:
- Well?

The old wizard looked out of the window, a little teary-eyed. He knew the time would come when he would have to talk to the prince about too. So he put his pipe down beside him, took a deep breath and began:
- "You know, Prince Leo, it's a terrible thing that you didn't know your father like I did. He was a great ruler. Not many men like him have sat on the throne of Legford. He fought many battles and won them all. So it was when the Black Falcon army marched on Legford 25 years ago. They were led by the notorious Lord Teoden, Godwin's father. You see, Lord Godwin is the current Lord of the Black Falcons. Teoden set his mind on conquering the Lion Kingdom and then establishing a unified empire across the continent.
He thought it wise to attack from the Riverlands, where the lions were not expected. However, the weather and the ruggedness of the countryside meant that their progress was very slow. By the time they crossed the Red River at Mount Moss, your father and his lions army were waiting for them. They had stopped Teoden's attack and destroyed most of their army. The young Godwin vowed revenge. He waited thirteen years for the right moment. Your father was passing by the Owl Mountains with his retinue when they were ambushed. 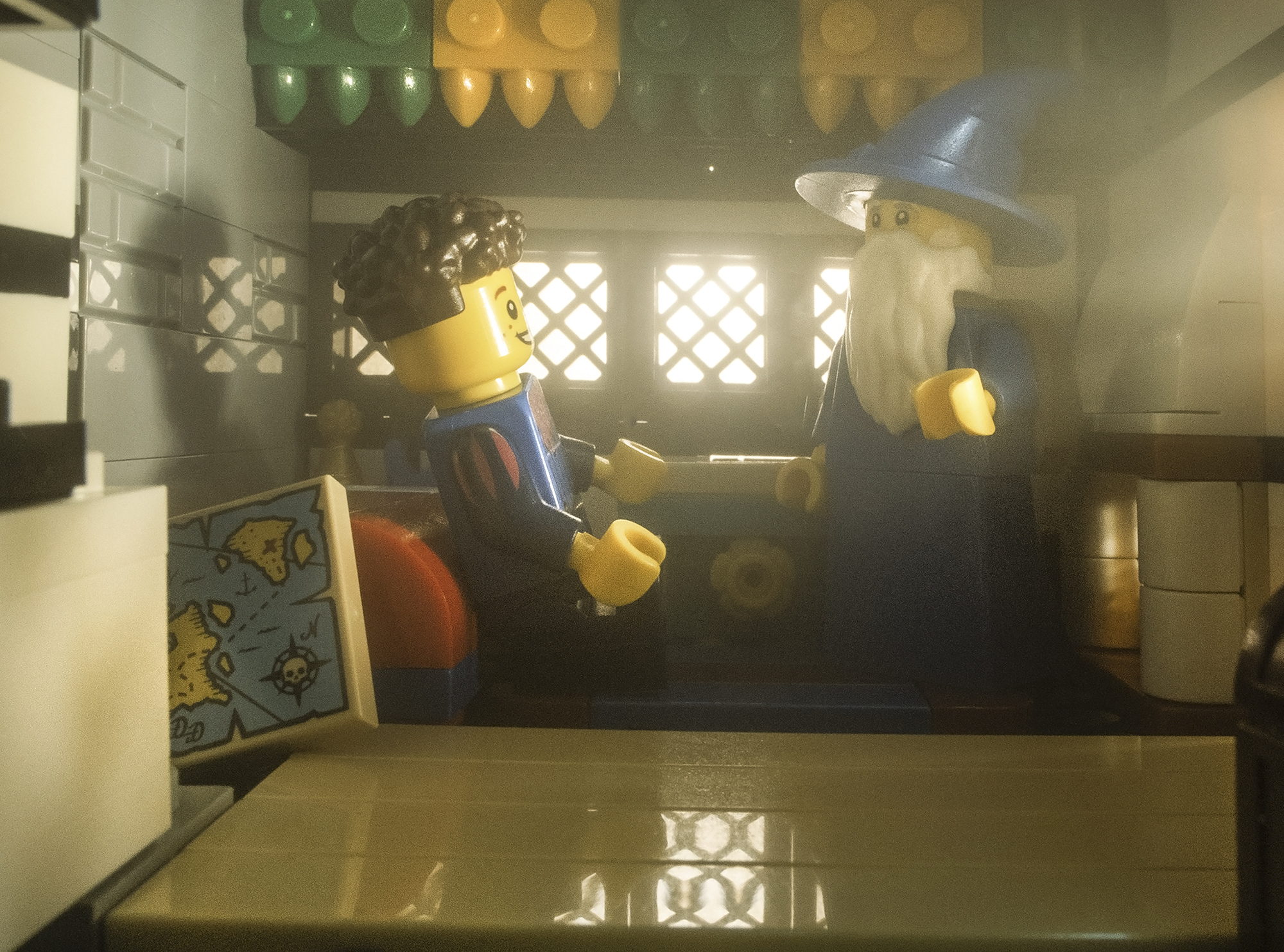 - How could my father be defeated by a band of Black Falcons? - Leo asked.
- Your father was betrayed. You know, good men are always in danger of forgetting how weak and evil others can be. Your father was loved and respected by everyone at court and beyond. But it was enough to have one or two people who, for money or petty self-interest, were able to sell out the peace of the kingdom. They couldn't even enjoy it, Godwin himself cut them down. Even the enemy doesn't trust traitors.
But Godwin will not rest. The Black Falcons have not regained their former strength since the Battle of the Riverlands. I'm sure we'll hear from them again. Maybe it won't be long...
- I will have my revenge on this Godwin! I will soon grow up and defeat my father's murderer! - the prince, with this determined impulse, picked up his toy sword and began to swing and leap. He accidentally knocked the pipe out of Boromir's hand, who had just picked it up in the naive belief that he could now have a little smoking. He resigned himself to the fact that it wasn't going to happen today.
The magician stood up, put his hand on the child's head and pointed out the window.
- Enjoy it while you're a child, my prince. There are countless battles waiting for you outside. Some battles are fought with weapons, some with decisions and words. Learn, when the time comes, to keep not only your sword but your mind sharp.
The prince pondered deeply on Boromir's words. Many years later he still remembered this conversation. He stared out of the window for a few more minutes in contemplation, then turned back to ask one more question. But by then the old wizard had disappeared.

Second Chapter – The Dark Past